Karma adds a simple rating Gadget to Waves, allowing participants of a Wave to rate each other. It also allows the expulsion and prohibition of users that have a low Karma from the Wave.i.e. if a user has beenrated repeatedly with a low Karma and tries to enter a Wave with the checkbox "Kick out low-Karma participants" activated, the user will not be allowed to enter the Wave (see screenshots below).

In the background, the overall Karma of Wave users is calculated using the Trust Metric algorithm from www.advogato.org.

If you want to use Karma, just add [email protected] to a Wave, and rate other participants. The more participants rate each other, the more accurate the global rate calculation becomes.

Here are some screenshots of the Gadget: 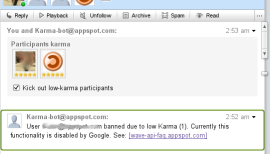 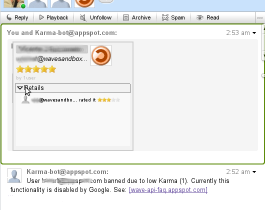 About our current algorithm

Our current implementation of the TrustMetric algorithm runs in Google's AppEngine and thus is subject to its quota and limits of use. We are trying to divide the Karma Calculation Task as much as possible to respect these limits. Until we tune the Calculation Task, the Gadget may not show the rates correctly from time to time. It's work in progress.

We also want to use karma in conjunction with our experimental barter gadget:

Note: The kickout function is implemented, but will not work until remove_participant operation is in the API.